You are here: Home / OUTWARDS

The Justus Utens lunette, depicting Villa La Magia without any kind of garden, gives us a clear image of the space setting around the residence at the end of the sixteen century. In the centre we can see well- cultivated fields, while the Villa is divided from them by a large square that spreads towards the cardinal points. In the pictures Utens did not leave out the artificial lake ( at the end of the eighteen century), made for the purpose of fishing and hunting, Gran Duke Francesco I favourite activities. The lake was united to the Villa by a tree- lined drive, which is still practicable and offers the access to the wood, also part of Villa La Magia estate.

The parterre garden and the Limonaia di levante

The residence was provided with a parterre garden during the first half of the eighteen century by Amerigo, leading figure of the Attavanti family, that bought Villa La Magia around the first half of the seventeen century. The garden realized on a lower level in respect to the Villa, is characterized by a circular fountain and by four flowerbeds, geometrically dividing the garden ground. Between the flowerbeds there are several walled in stones, used during spring and summer as base for the citrus trees basins (during autumn and winter, the trees stay in the Limonaia). In the eighteen century citrus trees were cultivated not only in big vases, but also as two little “groves” leaning against the wall edging the garden northern side. The flowerbeds were, instead, full of fragrant flowers, such as jasmines, lilies of the valley, pinks and violets. A parterre garden is a garden built up on a terrace.

However, the garden acquired the aspect we can see nowadays as well only after Giulio Giuseppe Amati bought the property. During the last ten years of the eighteen century the nobleman from Pistoia built the Limonaia (lemon- house) in the east zone of the parterre garden, in correspondence to the other one, previously built by the Attavanti family in the west part of the garden.

We also owe to Count Amati the setting of a part of the grounds as an English garden, near the Villa east wing. There, little paths shadowed by live oaks, bays and cypresses lead to a pond, which is surrounded by different kind of trees.

Architect Antonio Gamberai designed the project for that area of the gardens, near the Villa and the monumental gate of neoclassical taste. The gate constitutes the access to that part of the gardens.

At the end of the XVII century Amati built a chapel according to a neo-Gothic style. The chapel was built on the margin of the english garden and it replaced the XVII century oratory built by Attavanti family.

Amati family extinguished in XIX century with the last memmber Giovanni Tommaso. Giulio di Luigi Cellesi was chosen as heir of the aristocrat family and he had to acquire their last name.

Since 2000 Villa La Magia is a municipal property. 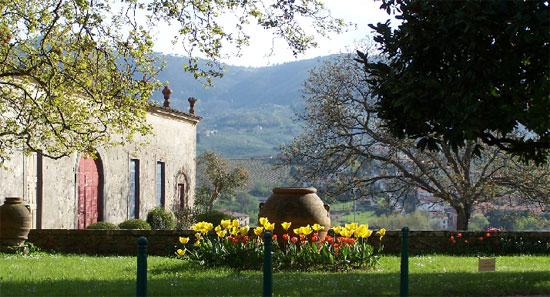 Events by kind and year